LINC launches ‘Esther Explains’, a series of educational animated videos for teachers and adults who wish to create safe and inclusive spaces for LGBTI+ young people to coincide with the BelonG To Youth Services Stand Up Awareness Week.

Taoiseach Micheál Martin said that ‘using resources such as ‘Esther Explains’ have the potential to help build greater empathy and understanding for LGBTI+ young people amongst their peers’.

Esther Explains is an animation series developed by LINC that tackles some of the basics of being LGBTI+ for young people. Ciara Mulcahy, LINC Community health worker who scripted and lead the project said ‘with research showing that 73% of LGBTI+ young people feel unsafe in schools, the aim of these animations is to start a conversation about diverse identities, assisting teachers, parents and other adults who want to help create safe, inclusive spaces for LGBTI+ young people to do so in an easy and accessible way’. 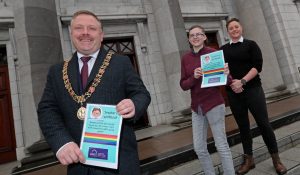 Designed by award winning animator Janet Grainger, ‘Esther Explains’ covers three topics in the current series, Being Trans, Non-Binary and Homophobic Language. ‘Esther’ (inspired by a LINC staff team member) is an Irish teenager who takes pride in responding to her family and friends’ queries about gender diversity and homophobia in familiar settings like at the kitchen table with her Dad, on the couch in the living room with her brother and in the school canteen with a class mate. The approach is casual and unassuming, with the tagline ‘Don’t be a butt!’ closing out each animation as a way of promoting inclusivity and acceptance in a relatable way for young people. The animations come with a workbook to help teachers and adults navigate the animations and the conversations that follow.

‘Esther Explains’ pack can be accessed from the resources section on the LINC website www.linc.ie or by emailing info@linc.ie

About LINC
LINC is a NGO headquartered in Cork, providing support services for more than 20 years. LINC’s central aim is to improve the quality of life, health and well-being of all women who identify as Lesbian or Bisexual in Ireland